On Flying and Driving: An Overgrown Boy’s Efforts at Heroics

Ever since I was a boy, I’ve imagined myself as a hero of sorts. I’ve given up on the 24-inch biceps, but elements of the hero image still have a pull. The Energy Biographies website includes inspiring stories about environmentalists who have virtually given up on flying, which is a personal sacrifice that strikes me as the kind of heroic act that I could enjoy. I firmly believe that we all ought to take responsibility for our impacts on nature and on people via the environment. Climate change is a crucial vehicle for such impacts. So I should give up flying, right?

Years ago, I was poised to make this kind of a leap, but colleagues of mine at UBC (Hadi Dowlatabadi and James Tansey) presented me with an argument that led me to a different approach. They pointed out that trying to mitigate one’s impact on the planet by changing one’s own lifestyle or purchasing is extremely inefficient. 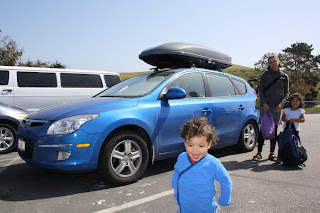 The car we ended up buying, with my family (my younger
daughter dressed to match).

Consider, for example, my dilemma re: cars. I wanted to express my concern about greenhouse gases when purchasing my car. I could either buy a fuel-efficient hybrid vehicle (e.g., a Toyota Prius), or I could buy a similar conventional gasoline-powered car (comparable vehicles to the Prius are several thousand dollars cheaper—as much as $10000 Canadian, even including the gas savings which are small for me as an infrequent driver), and invest the money I’d save to help others reduce their emissions. These ‘others’ would be people, communities and businesses that are interested in energy efficient options, e.g., skating rinks, swimming pools, but they would lack the capital to build the most efficient one. My money, along with the money of like-minded consumers, could help these others build infrastructure that will save many tons of greenhouse gas emissions at a fraction the cost. In the form of a ‘carbon offset’, I can get credit for some of the reduction in emissions, thereby effectively mitigating the climate impact of my driving for many years. For $100 Canadian. That’s ~100 times cheaper.

I like smart investments, so I’ve been ‘offsetting’ my travel ever since. I’ve made a commitment to myself, and to the rest of the world, to do so. It is a personal sacrifice, because carbon offsets are often not reimbursed or covered by grants, so I pay out of pocket more often that not. And flying has a very heavy toll for the climate, so $100 doesn’t even offset a family trip to our extended families in Toronto. It’s no 24-inch bicep, but it still helps my grandiose eco-hero self-image.

My commitment doesn’t make the kind of a statement as buying a Prius, or as refusing to fly. There’s something differently powerful about those conspicuous choices, and I applaud that. But personally, I also worried that by giving up flying I would be severely limiting my ability to be effective in work and advocacy. I feared that giving up my travel was giving up too much because I am optimistic about the impact I have when I travel and my ability to inspire others to take responsibility for their environmental impacts.. Besides, travelling can be fun!

I have no financial stake in offsetting companies, and I am very sympathetic to arguments about the failures of carbon markets, etc. (For several reasons, that I can expand upon if you’re interested, I think that reputable offsets, such as through Offsetters.ca, are not problematic in the same ways as carbon credits purchased off carbon markets.) But I do firmly believe that we need to provide a set of options for taking responsibility for environmental impacts that anyone could be keen on, not just those of us who fashion ourselves as climate superheroes.

Clearly there’s no one right answer. What do you do? How do you navigate the competing demands of family, work, pleasure, and climate responsibility? [If you’re interested in mitigating your environmental impacts—not just reducing them but having a net positive impact on the climate and other aspects of the environment, and leveraging larger structural change so that it doesn’t always take heroics—we’d love to hear from you at community.sphere@gmail.com, so we can tell you about Co-sphere, a Community of Small Planet Heroes….]

Clearly there’s no one right answer. What do you do? How do you navigate the competing demands of family, work, pleasure, and climate responsibility?